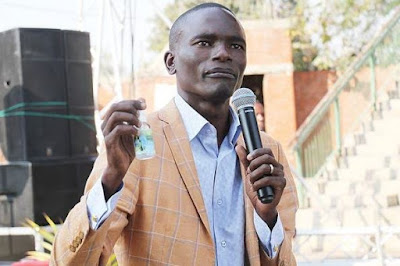 Controversial Zimbabwean prophet, Paul Sanyangore has said he has God's direct phone number and receives calls from him on how to help his followers. Speaking to H-metro, about a video where he was seen prophesying to a church member while on the phone during his Sunday service, he said: 'I have a direct channel, actually I have his number and I can call him when need rises.

People believe that the prophet could have been on the line with someone with information on the church member, but he responded saying:

'It is possible to talk to God, why would you doubt that I got a call from him? I actually have a direct line which I can call him and get instructions on how to proceed. I got this when I was praying and I heard a voice telling me to call direct.


I got instructions on the phone on what to do or say and that is what happened on Sunday. If the heavens spoke to Abraham why not us? You are of faith and people will always have doubts while others are being delivered,' he added.The man of God also revealed that a television channel called 'Heaven Online' will be launch soon, where more of his conversation with God will be hopefully heard.

'You will actually see more of this. We are hoping that we will be on TV this year and we actually have a session called 'Heaven Online.'