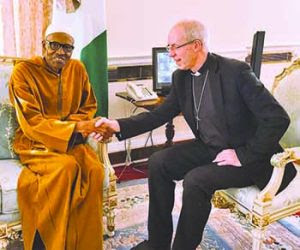 About 24 hours after the opening of the Kaduna airport as alternative to the Nnamdi Azikiwe International Airport closed for six weeks for the repair of the runway, President Muhammadu Buhari who had been out of the country since January 19 on medical reasons arrived the airport.

According to presidency sources and media report, Mr. President arrived some three hours ago, that is sometime around 4am.

After his arrival that wasn’t made so elaborate, he was flown off to Abuja in a presidential helicopter.

We will give you further details as the Aso Presidntial Villa opens for business later this morning.