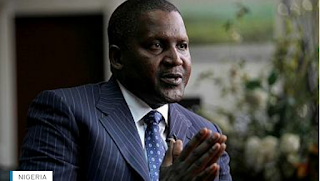 Business mogul and richest man in Africa, Aliko Dangote is currently the owner of the largest crawler crane in Africa.

The Assistant President and General Manager, Hanson Liu, said their biggest customer in Africa is Dangote.

We dispatch our stationaries through Tanzania and working with some big customers like Dangote.

He noted in an interview with leadership that Dangote has bought the largest crawler crane from them, weighing about 1250 tons, adding that the massive crane was assembled in Nigeria. 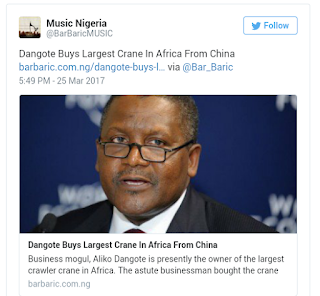 Liu equally said that XCMG sold about 5000 units of various kinds of products to customers in Africa last year 2016.

“We dispatch our stationaries through Tanzania and working with some big customers like Dangote. We presently have about 24 employees in service working with Dangote full time in Nigeria,” he said.

However, Liu pointed out that working in some African countries has not been without challenges for the company. He noted that the company plans to make investments in the continent in the future.

“In some countries, we cannot easily transfer money due to financial restriction there. Also its not easy to exchange currency. And some countries have security issues which makes us a bit nervous,” he added.

He noted that they were seeking for a suitable place and favourable policies.

“You know we are always thinking about it because the next era will be Africa. So, we focus a lot on Africa. Africa has huge potential regarding development,” he said.

Due to the high technology employed by the company, robots are a part of the manufacture process, raising questions as to whether or not this would increase unemployment in the world’s most populated country.