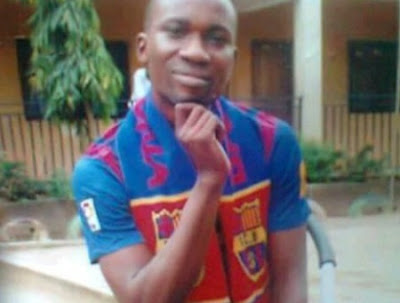 Its very unfortunate how people commit suicide or die by accidents every day in Nigeria and still nothing is done about it. Or is it not becoming a trend yet...when at least 5 people in a every month have reportedly commit suicide in Nigeria.

Just like in the case of this Ekiti man, Ariyo Olanrewaju Taiwo who was thought to be joking, after making a suicidal post on his Facebook page...committed suicide.

Its even worst that these people give signals that something is about to go wrong...but...

See what he wrote hours before he took his own life.

"Only got few hours to live.....feeling depressed but not scared of death......wish i can make things right again but NO...it is over...."

Only if someone had made serious meaning of his post, i guess he would have let it go...leave it for God. His problems would have been heard..even psychological as most times is the case.

Depression kills, it has just killed Mr Ariyo Olanrewaju Taiwo from Ado-Ekiti in Ekiti state. Only if he had sought for help. Only if someone cared...

If you begin to see symptoms or better srill, if you think you are going really deeper in depression( we will tell you more below)...you need to talk to a Psychologist. Well, you may not know many. Just talk to your Doctor...he knows how to help you come out, back to life.

For More On Depression On How It Kills YOU, follow the LINK below.

Tips To Help You Overcome Depression