Evil!! Woman Beats Husband’s 3-Year-Old Niece To Death For Vomiting And Defecating On Herself (Photos) 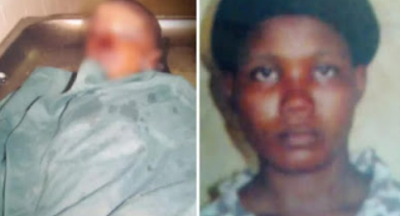 A 21-year-old woman, Rebecca Bassey, has been arrested by the Lagos State Police Command for allegedly beating her husband’s 3-year-old niece, Deborah Bassey, to death.

According to police authorities, the suspect beat up the girl because she vomited and defecated on herself. The incident occurred at Ijaiye Ojokoro, Lagos.

A Police source said: “The victim lost her mother and early this year, Deborah’s father was evicted from his home and he decided to send Deborah and his second child to go and stay with his brother, Vincent, until he settles down. Deborah and her nine-year-old sister were living with Vincent and his wife, Rebecca, in a one-room apartment at Powerline, Jankara, Ijaiye Ojokoro. However, Rebecca was always maltreating the two children.”

According to police investigations, on the day of the incident, Deborah woke up around 5.30am with a high temperature and was reported to have started vomiting and defecating soon after. This was said to have angered Rebecca, who instead of administering treatment to the child, decided to beat her up.

However, in the process of beating the girl, the suspect pushed her and she fell, hitting her head against the edge of a wooden chair in the room. The impact of her hitting her head against the edge of the wooden chair caused her to start bleeding. Some neighbours rushed her to Ahmadiyya Hospital, where she was referred to Orile Agege General Hospital where she later died.

Some neighbours, in their statements at the police station, described the suspect as a hot-tempered woman, who was fond of beating the children. Vincent told the police that he was not present when his wife beat his niece to death, saying: “I was not at home when the incident happened. I am a photographer during daytime but I work as a vigilante group member. So I hardly sleep at home.”

The suspect, in her defense, said it was not a deliberate act, as she had only pushed Deborah and she hit her head against the chair, saying: “I am a housewife and I have a 10-month-old baby. I did not mean to kill her (Deborah). I only pushed her because she vomited and defecated on the floor. I was only trying to correct her. It was not deliberate. I am a mother too and I know how I would feel if my son was killed.”

It was learnt that the matter had been transferred to the State Criminal Investigation Department, Yaba, as they await the autopsy result. What a wicked world.