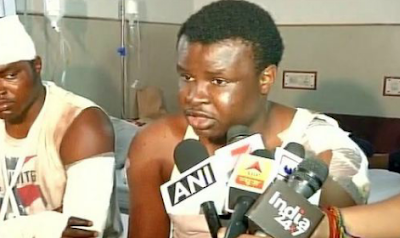 The Nigerian national who was assaulted in Greater Noida has said that no one helped them while they were being beaten up and claimed that he had no clue why he was assaulted.

"We don’t know why we were assaulted, the mob hit us with rods, bricks and knives.
We asked people around for help, but not one called the police. Even our colleagues did not help," said the Nigerian national as quoted by ANI.


Meanwhile, Uttar Pradesh Chief Minister Yogi Adityanath has assured thorough investigation and action over the incident. The UP government has said that a report will be provided to the Centre on the incident soon.

"Attack on Nigerian students is a serious issue. Proper probe will be done. Report will be provided to Centre at earliest,” said UP Minister Siddharth Nath Singh.The police have filed an FIR and five people have been arrested in connection with the assault on the Nigerian nationals in Greater Noida on Monday.

It all began when Manish Khari, a Class 12 student in Greater Noida, died, reportedly of drug overdose on Friday. It was reported that the boy was last been seen with five Nigerian students who lived in the neighbourhood.

Soon after the rumours spread, the locals raided their home and also accused them of being cannibals. The five Nigerian students were booked for killing Khari and were later released after the questioning.

External Affairs Minister Sushma Swaraj intervened into the matter on Monday night and sought a report from the Uttar Pradesh government over the attack on the Nigerian national. She also spoke to Uttar Pradesh Chief Minister Yogi Adityanath over the incident.

Meanwhile, Khari’s family insists that the police file murder charges against the Nigerian students. Nigerian students have been protesting against murder chargers and have held mass demonstrations. “Black lives matter,” “We demand justice,” and “Skin tone is not a crime” were some slogans that were heard outside the Kasna police station in Greater Noida during a protest on Sunday.