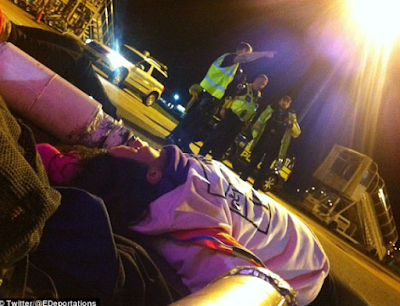 Up to 12 activists broke through security at Stansted Airport tonight and chained themselves together on the runway to stop failed asylum seekers being deported.

The left-wing activists were trying to stop a flight taking up to 100 immigrants back to Nigeria and Ghana.


The runway was closed at about 10pm resulting in eight flights being diverted to other London airports. But by 11.30pm the airport was running as normal.

The protesters were part of three groups called End Deportations, Lesbians and Gays Support the Migrants and Plane Stupid.
They were heard chanting: 'No borders, no nations, stop deportations'.
One of the activists blocking the runway, Emma Hughes, said she was trying to prevent families from being separated.