Home News Vampire who killed his 3 cousins and a soldier before his death, forgot to use his "disappearing" charm - Arrested Native Doctor

Vampire who killed his 3 cousins and a soldier before his death, forgot to use his "disappearing" charm - Arrested Native Doctor 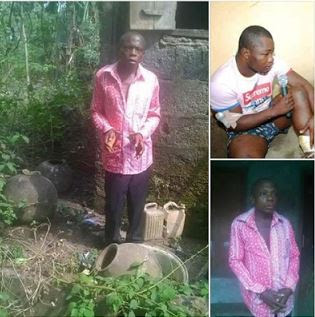 Yesterday, we reported that notorious Vampire's native doctor has been arrested. The Native Doctor, Iweajuo Gad who was arrested at his residence in Aba, alleged that he prepared the charm that enabled his escape from the Owerri High Court, with 3 other native doctors.

“Yes, I was his juju man. I performed the special ritual that made his escape from the Owerri High Court.

I did it with the assistance of three other herbalists. Part of the rituals included causing
disagreement among prison officials. We got the names of 7 prison officials through the help of Vampire’s brother.

Gad also went on to disclose the notorious kidnapper was killed because he probably forgot to use his disappearing charm, which he was supposed to tie round his waist.

One of the arrested suspects, Chukwuebuka Ikeazota, who spoke to newsmen, alleged that Vampire also killed his 3 cousins and a soldier before his death.

“I am related to Vampire by blood. He stopped coming to our house about 10 years ago, after he killed a soldier in Port Harcourt, Rivers State. I didn’t see him again until 2015, when he was arrested.

Before his arrest, he killed three of my uncles because they swindled him of some money he gave them to build a house for him. I used to visit him while he was in prison; to buy him food. .

During one of the visits, he gave me a note to take to his native doctor in Abia State. He was always in constant communication with my elder brother Cornelius. He (Cornelius) was the person Vampire gave money to buy SUV for him and he knows where Vampire kept his weapons. .

Vampire usually gave out his rifles for hire to various gangs of kidnappers operating within the state. It was Cornelius that organised the boys that went to the court to rescue him. Thereafter, they brought him to our house. Two days after his release, he regrouped his boys and they went into town, kidnapped four persons.”