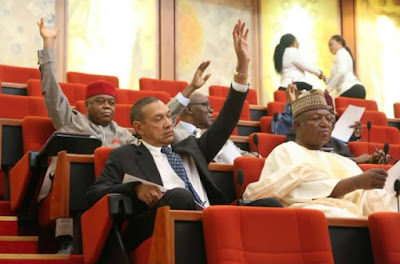 The allegations were made following a presentation by the chairman of the Senate Committee on Appropriations, Sen. Danjuma Goje, regarding the invasion of his home last week, by officers of the Nigerian Police Force (NPF).

“In addition, they also took my laptop and to make matters worse they took 18 files from my office. I am so traumatized now and I don’t know which files is missing, which files is available now. Some of these files have to do with the work I am doing,” Goje said.

“Like I told you, we are holding a meeting on the budget that last Thursday that they came. So from Thursday to now we have not been able to meet because some of the papers are not around, many of us are traumatised, my house as a politician is a beehives of activities; people are coming from all over the country to sympathise with me. I have no time to sit and from today we are trying to start sitting again as appropriation committee to see what we can do with the budget.”

He added: “I want to apologise to my colleagues that we could not keep to the timetable you gave us to lay the budget yesterday (Tuesday) and to get it passed (Wednesday); and I think it is not our own fault, it is the fault of the police because the police interfered with the whole of the budget process and I hope Nigerians will not turn out to blackmail the national assembly because the process were truncated by the police.”

Subsequently, the Upper Legislative Chamber directed the Inspector-General of Police (IGP) , Mr. Ibrahim Idris, to immediately return those documents and a computer which were taken away from the official residence of Sen. Goje. In addition, the Senate also asked the Police to tender a public apology to the National Assembly.

Senate President Bukola Saraki revealed that the Police had informed the Senate Committee on Police Affairs that the operation in Goje’s house was carried out based on a false lead from a whistle blower. He said the Senate would not take that excuse and stated that an immediate official explanation on the operation must be provided to the Senate.

“This matter is very serious, just as Senator Goje has said. It is now over five days with no statement or comments from the Police to tell us why this raid was done or to tell us where these files which are very important to the appropriation process.

“If a whistle-blower misled them, I think that this matter that has come out publicly like this to embarrass a Senator should be well handled. I think the Police, like in a civilised society, needs to come out and accept responsibility.

“If somebody has given you any wrong informatio, tell the public what you are doing with that person and if it is an intelligence officer that got the house wrong, come out and tell us. For five days now, nothing. I think it is unfortunately.

“I also got an information that the House of Representatives has also set up an adhoc committee on this matter and this committee that is set up should work closely with the House, particularly to ascertain the circumstances surrounding why they went to Senator Goje’s house.

“If truly it was a whistle blower and he gave them wrong information which is what the IG is telling them, what are they doing about that wrong information? Have they come out to make a public apology for this wrong raid?

“These are issues that the committee would look into and the files that are still in Police custody which Goje has told us is affecting the works before us, also needs to be brought publicly and formally to him because it was taken publicly.”

The Senate announced the establishment of an adhoc committee to begin an immediate investigation into the police operation and also to investigate the alleged assassination attempt of Senator Dino Melaye.

Afterwards, IGP, Ibrahim, met privately with the Senate President, Saraki, supposedly to tender an unofficial apology over the invasion.