Home News A 16 YEAR OLD BOY RAPES A ONE YEAR OLD BABY UNTIL SHE STARTS TO BLEED, IN ABAKALIKI, EBONYI STATE:

A 16 YEAR OLD BOY RAPES A ONE YEAR OLD BABY UNTIL SHE STARTS TO BLEED, IN ABAKALIKI, EBONYI STATE: 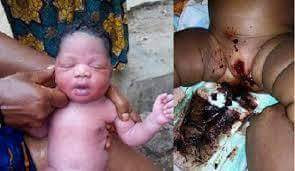 Report reaching us says a mother of four in Abakaliki, Ebonyi State on Tuesday shed tears as she lamented the brutal rape of her one year, four months old baby.

Narrating her ordeal, the petty trader, who did not want her name in print said the accused used the opportunity of her absence in the compound to rape her baby.

According to her: “It was last month, when I went out to do my normal business that the incident occurred in my yard. When I was going out, I told one of my daughters to look after her little sister. Instead of the girl to pay attention to her sister, she was careless about the child.

“It was at that moment that the 16 year old boy staying in our compound carried my baby into his room and raped her repeatedly until my baby started bleeding from her private part and anus.

“When I returned, I saw the boy (teenager) bathing the child in an attempt to stop the bleeding. We quickly took the baby to the hospital and discovered that she has been raped. The suspect is now in police custody in Ebonyi state.

“It took doctors at the Federal Teaching Hospital, Abakaliki, FETHA between 8am to 5pm of intensive operation to save the life of my baby”.

But when contacted, the State Police Public Relations Officer, DSP Madu Jude said his office was yet to be briefed on the development.

Speaking on the matter, one concerned Ebonyian, Mr. Emmanuel Nduka, condemned the act and then called on the state government and law enforcement agencies in the state to seriously check the frequent and increasing cases of raping of minors and the underaged in the state.