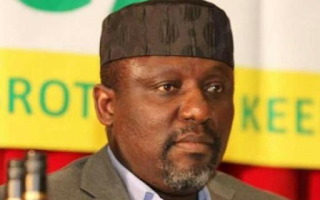 State Governors elected on the platform of the ruling All Progressives Congress (APC) want to remove Imo State Governor Rochas Okorocha as chairman of the Progressive Governors Forum (PGF) and replace him with a second term governor from the South West, a source very close to one of them told Daily Trust on Sunday in Abuja at the weekend.

The two second term APC governors from the South West are Governor Abiola Ajimobi of Oyo State and his Ogun State counterpart, Ibikunle Amosun. One of them is being touted to replace Okorocha though it is not certain which one of them the governors will settle for.

But that is as far as his chairmanship goes. He is not interested in charting a clear program for the forum, in harmonising the views of his colleagues or in making the forum an important player in the scheme of things. Even the opposition PDP Governors’ Forum has a higher profile and more political relevance than the APC Governors Forum. It is for these and many other reasons that they want to change him.”

He denied that the move is a ploy by South West APC governors to snatch leadership from Okorocha, the only APC governor in the South East. He also said it is not part of 2019 jockeying for power. He said, “At a time when our ruling party is facing many leadership problems, such as the ineffectiveness of the national leadership and the continuous tussle between the Presidency and the APC-controlled Senate, APC governors could play an important role in filling the vacuum and reuniting the party behind a common ideal. However, they are unable to do so because their forum’s chairman is even less effective than the national secretariat.”

Reacting, the Chief Press Secretary to Imo State Governor, Sam Onwuemeodo, said the governor was doing what he was supposed to do in the area of bringing the PGF to relevance as demanded by the duties of the chairman.

He said the chairman had always intervened alongside other governors to resolve issues between the executive and the legislature.

He said that since the federal government had set up a committee headed by the Vice President to look into the issue with a view to finding an amicable solution, there was no way the governor would bypass the Vice President