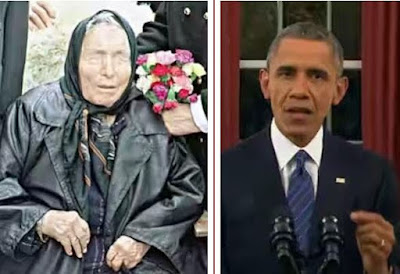 The blind Bulgarian seer who predicted Obama will be America's last president. The thing with prophecies is they have a funny way of coming true. We look out for the obvious manifestations but sometimes, its fulfillment is hidden in plain sight and we miss it.

Baba Vanga who predicted 9/11 and the rise of Islamic State said that Barack Obama would be the 'last US president', she also predicted correctly that the 44th President would be African-American.
Trump was sworn in and it seemed prophecy had failed but look beyond the surface.
America is more deeply divided than ever since the civil war and political fissures grow wider. The people no longer speak with one voice. This is not the America Obama left behind, a country that twice rallied to put an African-American in the White House and demolish historical racial boundaries.

The country's deep divisions was evident in a bitterly fought presidential campaign in which the popular candidate amassed a 3 million majority of the votes but couldn't make it to the White House. Those divisions remain and president Trump has encountered massive opposition in his attempt to tear down Obama's legacy and build his. What's more, it doesn't appear things are going to cool down anytime soon. Looks like Baba Vanga who died in 1996 aged 85 may have been right after all.