#BBNaija: 'My father sent me a picture of my breast' - Tboss 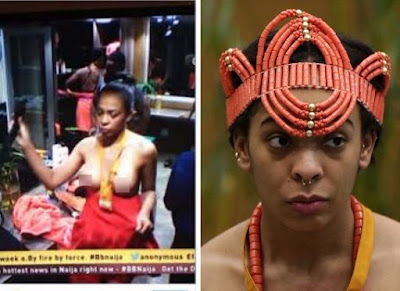 Big Brother Naija Second Runner up, TBoss has finally addressed some controversial topics that trended on social media during her stay in the house.

'In an interview which Beat FM shared last night, the rising star opened up on why she bared her breasts, her failure to recite the National Anthem, and the viral clip of her saying she would spend the N25m in a week if she won it.

“The Big Brother house was a place where I was myself. At home I don’t shower with my clothes on,” said the ex housemate whose real name is Tokunbo Idowu, adding that she stripped to take her bath because that’s a given.

However Tboss added that she had to shield a part of her from the camera. But she noted that stripping had become normal to her because, “Usually, in my house, I just walk around Naked.”

The housemate revealed that she never knew that exposing her breasts would cause a lot of drama on social media, that it wasn’t until she returned that her father sent her the viral screenshot that earned her so much criticism. “He actually did a [snapshot]. He just sent me a picture of myself, and I was like, ‘Oh, Lord!”

Asked if her father was aware before now that she pierced her Tip, the BBN star expressed mild outrage. “He is now, but why would he know about that before #BBNaija?