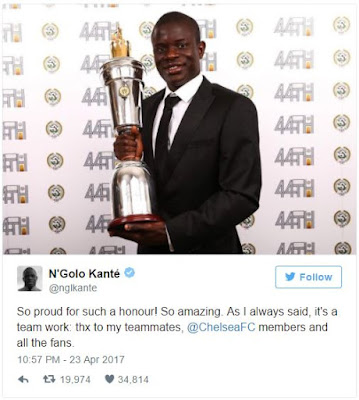 The former Leicester City midfielder has been in sensational form since moving to London, and has been rewarded with the coveted trophy

France international Kante has enjoyed an incredible rise in English football after joining Leicester City from Caen in 2015.

Having played a key role in Leicester's remarkable Premier League title success last term, the midfielder has continued to star at Stamford Bridge for this season's leaders, Chelsea.

Alli has also enjoyed a marvellous campaign for Spurs, his 16 goals and five assists vital in their title challenge.

He becomes the fourth player to be named Young Player of the Year in successive years, after Ryan Giggs, Robbie Fowler and Wayne Rooney.

Kante was one of the favourites for the senior award 12 months ago, when his former Leicester team-mate Riyad Mahrez claimed the crown, and his fellow professionals voted him as the winner this time around.

The 26-year-old has played 31 of Chelsea's 32 games in the Premier League so far this season, once again drawing plaudits for his immense athleticism, tackling and reading of the game.

Much like Kante, Alli's adaptation to the Premier League has been hugely impressive since he jumped up from League One side Milton Keynes Dons in 2015.

His form at Tottenham has helped the 21-year-old to also become a prominent figure on the international stage with England, forming a fine partnership for both club and country with Harry Kane, who was also nominated for the main award.

Alli could yet inspire Spurs to the Premier League title as well, with Mauricio Pochettino's men only four points adrift of Chelsea with six matches to go.