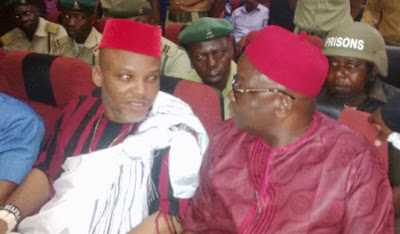 A Federal High Court in Abuja on Tuesday granted bail to the leader of Indigenous People of Biafra, Nnamdi Kanu, on health grounds.

Justice Nyako however barred the IPOB leader from granting press interview while on bail.

The judge also gave a stern warning to the defendant not to participate in any rally or be found in a crowd of more than 10 persons in the course of the bail.

She however refused the separate bail applications filed by the the IPOB leader’s co-defendants.

The accused persons charged along with Kanu and who were denied bail by the judge were the National Coordinator of IPOB, Mr. Chidiebere Onwudiwe; an IPOB member, Benjamin Madubugwu, and a former Field Maintenance Engineer seconded to the MTN, David Nwawuisi.

The court also in a separate ruling rejected the application by Kanu and two of the co-defendants seeking the setting aside of the court’s earlier order granting protection to prosecution witnesses to enable them to testify behind a screen or in mask as well as using pseudonyms to refer to them during proceedings.

Kanu who had been in detention since 2015 was granted bail on Tuesday following the application filed by his lawyer after part of the charges filed against them were struck out by the court.

Justice Nyako noted that she had observed that Kanu was always having to sit down in the dock whenever he appeared in court, a development which she said could be an indication that he could be suffering from an ailment that could not be treated in prison.

She therefore granted bail in the sum of N100m with three sureties in like sum.

The judge ordered that one of the sureties to be provided by the defendant must be a highly placed person such as a senator.

She directed that the other must be a highly recognised leader in the religion being practised by Kanu.

When asked by the judge in the course of reading the ruling, Kanu said he was practising Judaism.

The third surety, according to the judge, must be a resident of Abuja and who must have a landed property in the Federal Capital Territory.

The court fixed July 11 and 12 for commencement of trial.