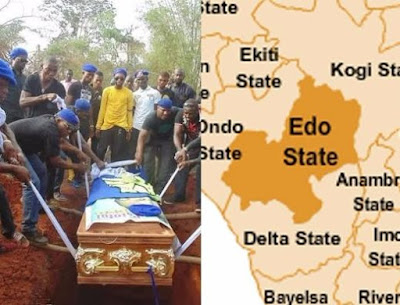 According to NewTelegraphOnline
'This follows the discovery through its statistics by police in the state that over 16 students of the institution have so far been beheaded during violent cult clashes between various groups in the state.

Commissioner of Police in the state, Mr. Haliru Gwandu stated this on Wednesday while briefing newsmen in Benin, the state capital on the successes of the command in the last three weeks.'

He disclosed that 61 suspects, who include armed robbers, kidnappers, cultists and rapists, were arrested within the period under review.

But in a swift reaction the Deputy Registrar, Information/Public Relations Officer of the University, Mr. Edward Aihevba, said the statements credited to the commissioner of police “as totally false and embarrassing.”

Aihevba said management of the institution “is horrified by the false news story, making the rounds in the print, electronic and social media, credited to the Edo State Commissioner of Police, that three lecturers of the university have been arrested for alleged cult-related activities.”