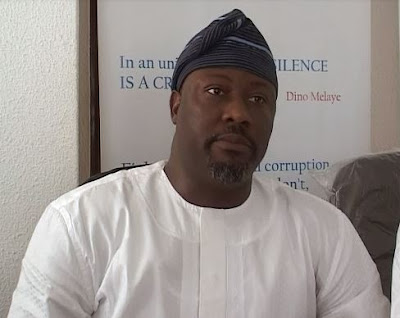 Senator Dino Melaye in the early hours of yesterday escaped an assassination attempt on his life at his home in Ayetoro-Gbede in Kogi state.

According to reports, about 10 gunmen stormed Dino's home at about 12 midnight and started shooting sporadically at the building.

Although Dino wasn't hurt, two of his cars were riddled with bullets.

He made a distress call to the state Commissioner of police, Wilson Inalegwu, who ordered policemen to the scene. However before the police got to his home, the gunmen had escaped.

The commissioner of police has ordered an investigation into the attack.

Speaking on the attack, Dino said he believes the assassination attempt was politically motivated.

“At about midnight, we started hearing gunshots. They fired more than 200 rounds of bullets into the house. This attempt to kill me will not stop me from speaking the truth.

If I speak the truth, I will die. If I lie, I will die. I’ve decided to speak the truth and die. I’m not afraid of death. I only respect men, I don’t fear them. I am championing an administrative cause. I will continue to speak and be the voice to the voiceless. I’m not deterred. I remain resolute to make Kogi better. Noting will stop me from coming home. The DPO did not come to my house until three hours later. Even the area Commander in Kabba was not notified until I called the Commissioner of police. I suspect a Satanic collaboration between Taufiq Isa and the police in Aiyetoro because the duo held a meeting two days ago. Only God will protect us in this country but definitely not the police” he said