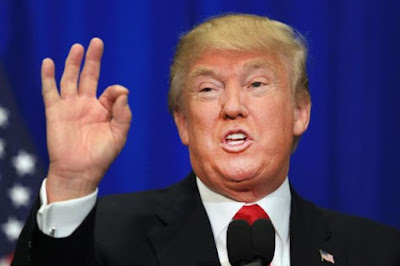 Donald Trump has spoken out after the US dropped the ''Mother of All Bombs' on Afghanistan ..The GBU-43/B Massive Ordnance Air Blast Bomb, is a 21,600 pound, GPS-guided munition that is America's most powerful non-nuclear bomb.

Almost 20 feet long and designed to burrow through 200 feet of earth and 60 feet of concrete before detonating, Asked specifically if he authorised the strike, Trump said:

“Everybody knows exactly what happened, so…and what I do is I authorise my military. We have the greatest military in the world and they’ve done a job as usual.

“So we have given them total authorisation, and that’s what they’re doing. And frankly that’s why they’ve been so successful lately.”Military officials told CNN in 2003 that the MOAB was mainly conceived as a weapon employed for "psychological operations."

They said they hoped the MOAB would create such a huge blast that it would rattle Iraq troops and pressure them into surrendering or not even fighting.