Home News Drama in Anambra as Speaker Disappears With Mace

Drama in Anambra as Speaker Disappears With Mace 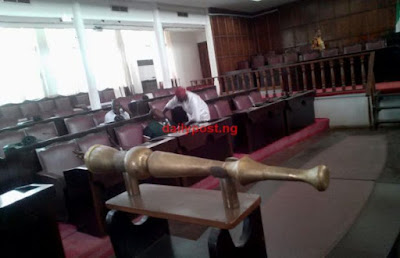 Drama ensued at the Anambra State House of Assembly on Thursday following a move to impeach the speaker, Mrs. Rita Maduagwu by members of the house.

Mrs. Maduagwu on sensing the looming danger quickly took the mace, the symbol of authority of the legislative house and vanished into thin air.

Earlier, over 28 members of the house had assembled at the hallowed chamber for the business of the day.


Few minutes after their convergence, the state governor, Chief Willie Obiano drove to the House of Assembly complex, apparently to intercede.

The speaker, who noticed that her colleagues were not ready to obey the governor decided to escape with the mace, unnoticed.


When the bell signifying her coming into the chambers rang severally, the speaker was nowhere to be found.

The development forced the majority leader, Victor Okoye to call for the adjournment of the house to Tuesday, April 11‎.