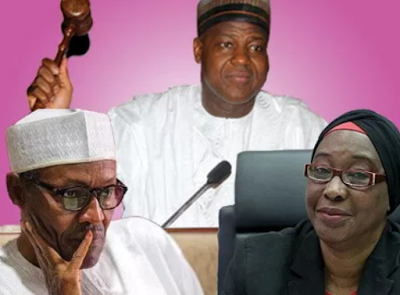 Yakubu dogara - Jamila Shu'ara
The frosty relationship between the Executive and the Legislative arms of Government on Thursday claimed its first victim from the executive as the House of Representatives revoked the extension of service granted the former Permanent Secretary of the Federal Ministry of Education, Dr (Mrs) Jamila Shu’ara, by President Muhammadu Buhari with immediate effect.

Handing down the order in Abuja, on Thursday, when the Head of Service of the Federation (HOSF), Mrs Winifred Oyo-Ita appeared before the House of Representatives Committee on Basic Education and Services over the extension of service granted to the former Permanent Secretary, the Committee declared that the President under the 1999 Constitution as amended has no such power and asked her to quit office immediately.

The Committee also directed the HOSF to the relevant rules to recover all the emoluments paid to her for the period of the extension and ordered the former Permanent Secretary to vacate office immediately, insisting that “her retirement date remains February 20th, 2016.”

7>That the President has no power under section 171(2)(d) of the 1999 Constitution or any other existing law to extend or elongate the tenure of Permanent Secretary whose tenure has expired by reflexion of time or age whichever comes first.
That the Head of Service should invoke the relevant rules to recover all the emoluments paid to Mrs Jamila Shuara for the period of the extension.

>That the Government should ensure that Civil service rules and procedures be strictly followed in future.
That the retirement date of Dr Mrs Jamila Shuara remains 20th Feb. 2016.

>That Dr Mrs Jamila Shuara should vacate office immediately as her retirement date remains 20th Feb.2016 and that the Head of Service should ensure compliance to this subject matter, and report back to the House in four weeks’ time.

7>The HOSF had earlier told the Committee in her written defence, that Mr President had the power to appoint or disengage any Civil servant which covered him for such an extension and that she was still waiting for a clearance from the Presidency on the memo she sent there on the matter.

>She also claimed that she had already called for the record of service of Dr Shuara from the Civil service Commission but which she was yet to get a reply.

Her letter of defence to the Committee dated 29th 2017 reads

I did not write any letter dated 17th March, 2016 with Ref. No. HCSF/1013/1 on the tenure of Dr (Mrs) Jamila Shuara as Permanent Secretary, rather the last letter wrote on this matter dated 17th March, 2017 with Reference No. HCSF/1013/1 was to Chief of Staff to the President. I have sought Mr President’s permission to release a Copy to the Honourable Committee and I am awaiting for His Excellency’s response.

On the extant laws and rules guiding appointment, extension of appointment, Section 171 (2) (d) of the 1999 Constitution of the Federal Republic of Nigeria (as amended vets the President with the power to appoint and remove Federal Permanent Secretaries, and by virtue of Section 11(1) (a) (c) of the implementation Act Cap 123 laws of the Federation 2004, whoever has the power to appoint can re-appoint or reinstate.