One construction worker has miraculously survived after falling onto a set of bars which impaled his body in four places. The man was working in Bengbu City, East China's Anhui province on March 29 when the incident occurred. He is now recovering in hospital and is said to be in a stable condition.
In the footage, the four bars can be seen in the man's chest, stomach, back and thighs. 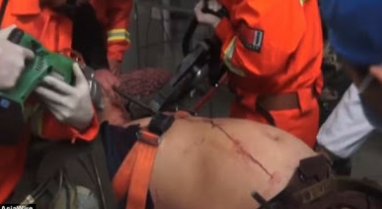 He was left suspended in the air by the fall.

People can be seen holding him up to try and ease the pressure. According to reports, he had to try and keep as still as possible for around half an hour.

The man can be heard moaning in pain as firefighters cut down the rods to help free him.

They used both cutters and a saw to make the rods smaller. 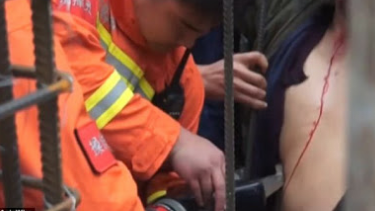 He was rushed to hospital where he underwent surgery to have the remaining sections of the steel bars removed.