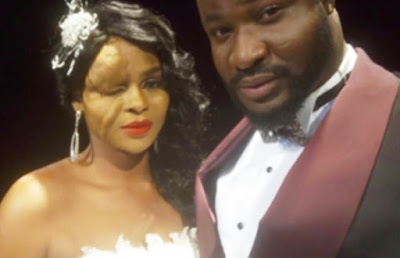 After the release of this picture, many fans of Harrison Tare Okiri popularly known as Harrysong were shocked to see the Ijaw born singer getting married to one eyed lady.

The photo which had created a lot of controversy with many people its authenticity, it is Photoshopped as many fans reacts to the picture.

The picture was not photoshopped as alleged, however, information available to Showtime is that it was a scene from the singer’s video shoot during the week.

The story is said to border on the unconditional love of a certain young man who married his partial blind lover defiant of his mother and his best friend, Udeme’s discouragement.

The title of the song is Comsa. Video was shot by the ever creative Adasa Cookey of Squareball Entertainment and special effects by Ife of Beauty Makeovers.