Home Gossip News "I am not corrupt and I don't like money" - Minister of Transportation, Rotimi Amaechi [VIDEO]

"I am not corrupt and I don't like money" - Minister of Transportation, Rotimi Amaechi [VIDEO] 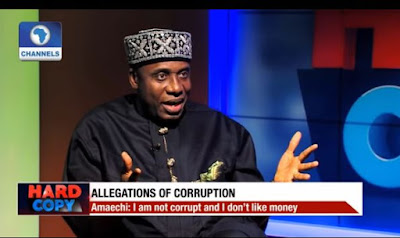 Minister of Transportation and immediate past Governor of Rivers State, Rotimi Amaechi, said this in an interview with Channels TV. When asked whether he is corrupt, Amaechi said;

"Is my honesty in doubt? I have told Nigerians and I repeat to Nigerians today I am not corrupt and I don't like money. I am not one swayed by money. I have lived a character that most Nigerians can tell you.

I try as much as possible not to annoy God by saying I am honest. But with all modesty, I am a honest Nigerian and there are very few honest Nigerians." On why people keep having the impression that he's corrupt, Amaechi replied; "When did that impression start? Nyesom Wike becomes the governor. He takes documents from Government house that people cant read, and says oh, we sold Gas turbines and disappeared with the money. He set up a panel of inquiry? Publish the report." When asked whether he thinks the corruption angle came because he led the campaign organization of President Buhari, "When you talk about the PDP angle, they are bitter that we fought and led the movement against the former government and PDP, and we were successful to have removed them from power. If I was corrupt, why didn't President Goodluck prosecute me? The fight between Goodluck and Rivers state government or myself lasted for two years, Amaechi said:

Watch the video below...