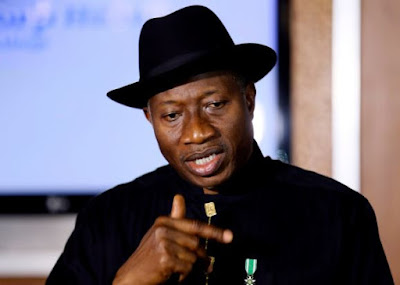 Former President Jonathan has debunked reports that he received the sum of $200m bribe from the Malabu oil deal.

Jonathan's denial comes after American news website, Buzzfeed, claimed in a report that he got $200m in the 2011 controversial sale of the oil block OPL 245 from indigenous oil company Malabu to Shell and ENI.

In a statement released yesterday through his media aide, Ikechukwu Eze, he denied the allegation saying report was 'false in its entirety.'

The statement reads: 'The allegations that former President Goodluck Jonathan received $200 million as proceeds from the Malabu Oil deal which were published on a gossip news site, Buzzfeed, and republished by a few other newspapers, is false in its entirety, and is one more in the series of fake news sponsored by those threatened by Dr. Jonathan’s continuously rising profile in the international community.

Common sense should have shown the purveyors of this slander that the Malabu oil deal far predated the Jonathan regime and it would only make sense for him to be bribed if he had a time machine to go back in time to when the deal was struck.

The report relied on hearsay evidence from a man of questionable character who provided no substance to back up his false claim.

The man quoted by the report said he ‘assumed’ that Dr. Jonathan would be bribed. Since when has the assumption of a crook been enough to smear the reputation of a patriot and international statesman like Dr. Goodluck Jonathan?' the statement said.