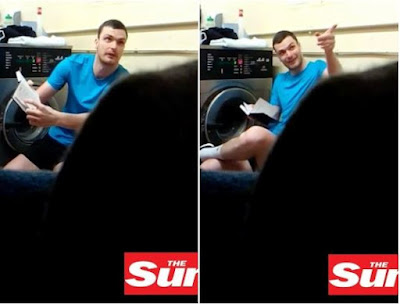 The ex-England star, 29, is serving six years for sexual activity with a girl, 15.In a video inside jail, a fellow lag points out that he did not commit rape.

He also makes crude breast gestures about the girl. Sources say his hopes of release are now over.

The disgraced former Sunderland star, 29, jailed for grooming, kissing and touching a 15-year-old girl, told jurors at his trial he was “ashamed” of his actions.

But in a shocking video recorded behind bars by cons, defiant Johnson blamed his celebrity Premier League status for landing him in jail — and dismissed his crimes as “f*** all”.

Asked by inmates what would have happened if he was “Joe Public”, he said:
“I would have got a caution at the police station. They might not even have charged.”
The shock six-minute film, believed to have been filmed in the laundry room at HMP Moorland sparked an immediate investigation by prison chiefs.
Prisoner: “How long you got, six years int ya?”
Johnson: “Yeah.”
Prisoner: “And you never even f***ed the bird?”
Johnson (laughing): “I didn’t even get my c**k out.”
Prisoner: “It’s not like you f***ing raped her or owt like that?”
Johnson (laughing): “No, I wish I f***ing did for six year.”
Johnson, who has a two-year-old daughter with his ex Stacey Flounders, then told how his victim used to wait for him with her “t**s out” when he played for Sunderland.