Home News JUST IN!!! IPOB Announces New Official Base Of Biafra (It Is Not Enugu!)

JUST IN!!! IPOB Announces New Official Base Of Biafra (It Is Not Enugu!) 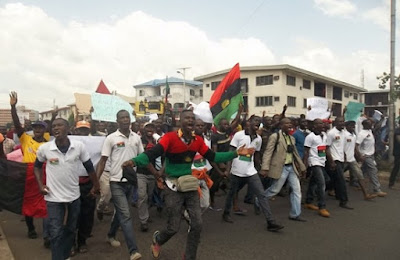 The Indigenous People of Biafra (IPOB) has said that Port Harcourt formerly referred to as ‘Igweocha’ is now the official base of Biafra.

In a new statement sent to NAIJ.com by its spokesperson Powerful Emma, the IPOB said, the leadership of the group commends the unity among Biafra agitators across the world.

Emma said: “The new solidarity amongst Biafrans from all walks of life in the quest and movement towards the independent state of Biafra is a thing of joy and it shows that our people have realized the past mistakes made by our fathers and cannot allow the divide and rule tactics initiated against the good people of Biafra by Hausa Fulani oligarchy supported by British government to stand again.”

Emma said the fact that the people of Ikwerre and other communities in the South-South and South-East region are concerned in the agitation for Biafra is an advantage in the quest for the freedom of Biafra.

“More so, Igweocha is considered by many now to be the unofficial power base of IPOB led Biafra resurgence. We also hope that Uyo, Oron, Warri, Ogoja and Yenegoa will be the centre for the struggle in no distant future,” Emma said.

Going by what happened among our people on 20th March 2017 in Abuja during the High court sitting presided over by justice Binta Nyako, the case between our leader Mazi Nnamdi Kanu and the federal government of Nigeria where our mothers, fathers, youths, elders, clergymen and traditional title holders in Biafraland converged in one spirit praying to Chukwu Okike Abiama (God Almighty) for the release our leader and restoration of ancient nation of Biafra, you understand that Biafra independent is around the corner.”

IPOB said the unity among its people, “Biafra will be the freest nation on earth where natural justice embedded in the principles of live and let live will guide our interactions between each other and constituent nations.”