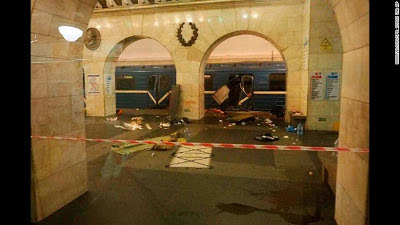 Terror on Monday showed it's ugly head once again, as a train station in St Petersburg, Russia experienced bomb blasts killing 11 people with so many others injured, in what the Russian Prime Minister Dmitry Medvedev described as a "terrorist act."

The train where the bomb blast occurred was traveling between two stations in St. Petersburg, Russia's second-biggest city and another bomb was defused in another station, but no terrorist group as at press time had claimed responsibility for the act.

The entire metro system in St. Petersburg has now been shut down.
"So far, we say it was an unidentified explosive device as investigators and the Federal Security Service's bomb specialists are to establish the exact cause of this explosion," Andrei Przhezdomsky told state-run Russia 24. 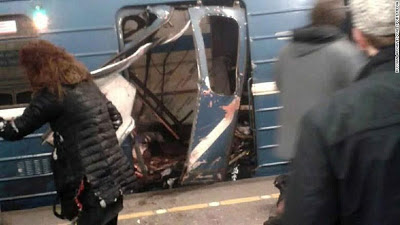 "In the metro car, everyone expected death, if I can say that. After the explosion, everyone expected consequences. Then we were taken out, and people began to help each other, brought others out. Most were covered in blood," a passenger on the train told TASS.

Another passenger at the Sennaya station, Stanislav Listyev,  told CNN;

"I was going going down the escalator at Sennaya square at about half past 2, and at that moment I felt an explosion wave underneath. Everything was filled with smoke, people started panicking. So the trains stopped and almost immediately the evacuation started,"

Russian Prime Minister Dmitry Medvedev said in a message on Facebook;
"Those who suffered during the terrorist act in the St. Petersburg metro will be provided with all the necessary assistance,"
"My most sincere condolences to the families and friends of the victims of the explosion. This is a common pain."

Viktor Ozerov, chairman of the defense committee in the Federation Council said: 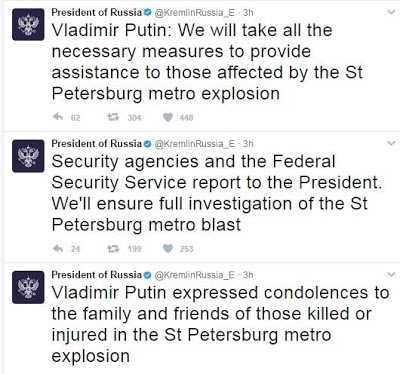 "The choice of the place and the timing of these blasts is not accidental. The president of Russia is in [St. Petersburg], the media forum is taking place there, there are many journalists,"