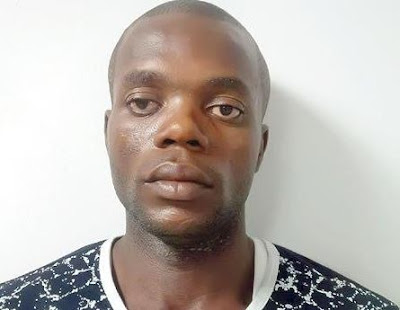 The suspect, Umeme Lotachukwu Fabian from Anambra State was arrested while attempting to board a Qatar Airways flight to Indonesia with a Cote d’lvoire International passport bearing the name Grou Bi Clauvis.
Umeme, who also had an identity card claiming to be an Ivorian, while under observation at the airport, excreted eighty-nine (89) wraps of the methamphetamine. The NDLEA commander at the Lagos airport, Ahmadu Garba, said that preliminary investigation conducted by the agency revealed that the suspect hails from Anambra State with the name Umeme Lotachukwu

Umeme, who attended Boys Secondary School, Onitsha where he graduated in 2007, after his secondary education, started selling clothes at Onitsha main market before he travelled to India in search of greener pastures in 2013 and returned to the country in 2015.

In his statement, the suspect said that he was offered the sum of five thousand dollars to smuggle drugs to Indonesia.

"I am the only son of my parents. I wanted to invest the money in my clothes business and also commence preparation for my marriage in a bid to settle down in life. They offered me the sum of five thousand naira to smuggle the drugs to Indonesia."

He also stated that he was not aware that drug trafficking attracts capital punishment in Indonesia.

The NDLEA chairman/chief executive, Colonel Muhammad Mustapha Abdallah (retd.), while expressing satisfaction with the arrest, promised to investigate the identity falsification by the suspect.

"This is a very dangerous development, as the suspect could have been consigned to the gallows under a false identity," Abdallah said, warning that those contemplating drug trafficking must endeavour to avoid acts of criminality.

The suspect will be charged to court on completion of investigation.