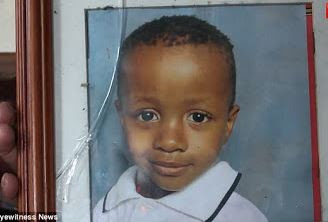 A 'vampire' killer slashed a young boy's throat in the street and sat over him drinking his blood in what has been called a sacrificial killing in South Africa.

'Tinyiko Reckson, five, was playing with friends outside his home in Soweto, Johannesburg, when a man dressed in religious garments grabbed him.

He plunged a blade into the boy's throat three times then laid him down and knelt to drink his blood in a suspected ritualistic murder.'

An angry mob in Soweto seized the 21-year-old knife-man whose face was covered in fresh blood and battered him.

Police raced to the scene and saved him from being beaten to death while paramedics battled in vain to save the boy's life.

An eye witness said: 'This madman was dressed in church clothing and as it is days before Good Friday it was a sacrificial killing.'

Police spokesperson Kay Makubele said a 21-year-old man had been arrested and charged with murder and will appear before magistrates.