Home News Many injured as cult members go on rampage in Mushin, Lagos

Many injured as cult members go on rampage in Mushin, Lagos 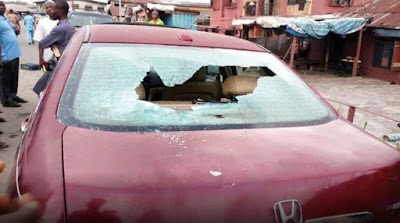 Many people were injured in Mushin and Oshodi areas of Lagos State yesterday as a factional cult group yesterday went on rampage.

The hoodlums, which consisted of youths aged between 18 and 25, were seen brandishing weapons such as guns, machete, broken bottles, iron rods, and charms.

According to reports from the guardian, two factions of a cult group engaged themselves in a supremacy battle at the Mushin area of Lagos.

They attacked themselves and other road users as well as destroy the windscreen of cars of people parked along the road.

According to a resident in the affected area, John Udo, gunshots were fired and they took cover in their various homes.

Many vehicles were smashed and
properties destroyed.

“My car was badly damaged. My landlord’s car was affected too. Two of my neighbours, who came back from night duty were seriously injured.” He said.

“We have been seeing them for the past three days converging on vantage positions, smoking and drinking without control. We reported to the police, but the police did not take any action until this fight broke out.” He continued.

Olarinde Famous-Cole, The Police Public Relations Officer (PPRO), who confirmed the incident at Mushin, said no life was lost and no arrest was made.

According to him, it was a minor dispute and the police is in control of the situation.