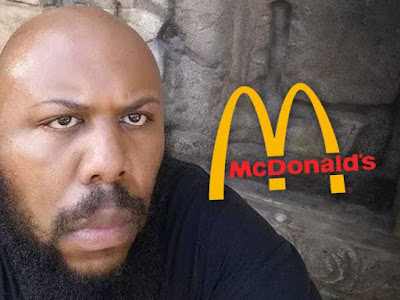 Facebook killer Steve Stephens at about 11 a.m. Tuesday, ordered a 20-piece McNugget and a large French fries at a McDonald's drive-thru on Buffalo Road in Erie, Pennsylvania, store employees said. An employee recognized Stephens, and tried to stall him by pretending his fries weren't ready while they called police, the store's manager said.

According to the manager, Stephens got his nuggets, but then said he had to go and he drove off without the fries but that gave the Police enough time to show up.

Stephens drove off just as Pennsylvania state troopers arrived and led them on a chase for about two miles.

Carl White Sr., who watched the chase unfold, said a cruiser rammed Stephens' now infamous white Ford Fusion in front of an abandoned school. The impact popped at least one of Stephens' tires.

Police swarmed the car, and Stephens fatally shot himself.

Wonder if the employees will get the reward money.