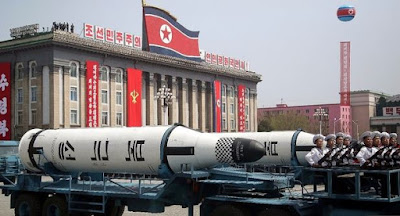 North Korea tried to fire a missile it introduced few hours ago at a military parade - but the launch was an embarrassing failure after the weapon failed and blew up almost immediately. The missile which is supposed to be one of the country's new 'game-changer' intercontinental ballistic missiles (ICBM) which was revealed to the world in a display of military might during the country's parade and celebration of the country's creation yesterday.

The South Korean defence ministry said it had detected a failed launch from Sinpo - where North Korea's biggest submarine base is located.

According to a military official the weapon is 'presumed to be a new ICBM' as it is longer than the existing KN-08 or KN-14 missiles.

North Korea launched this missile for the first time earlier this month, firing it from a land base near Sinpo, home to a known North Korean submarine base. The missile did not appear to go very far, but still, analysts described the development as “scary” because of the solid-fuel component.

The information of the failed missile launch didn't come from North Korean Govt, it came from the South Korean defence ministry which released a statement.
The statement read:

'North Korea attempted to test an unidentified type of missile from Sinpo area in the South Hamkyong Province this morning, but we suspect the launch has failed.'North Korea has launched 5 missile launches that are mobile ICBMs that can reach as far as the United States and yesterday's failed launch would have been the 6th one.