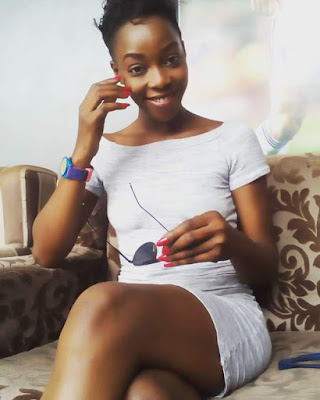 Following the reported rape of a 7 year old girl to death by the son of an unnamed Senator, many Nigerians have reacted in different ways and media.


But, this beutiful actress, April Joju Muse, feels that if God really exists, all these calamities would not be happening.

She has serious questions for us all. 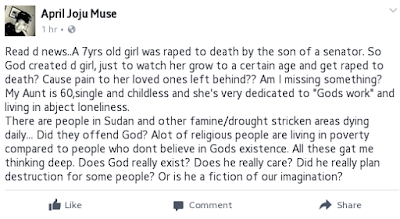 Read d news..A 7yrs old girl was raped to death by the son of a senator. So God created d girl, just to watch her grow to a certain age and get raped to death? Cause pain to her loved ones left behind?? Am I missing something? My Aunt is 60,single and childless and she's very dedicated to "Gods work" and living in abject loneliness.There are people in Sudan and other famine/drought stricken areas dying daily... Did they offend God? Alot of religious people are living in poverty compared to people who dont believe in Gods existence. All these gat me thinking deep. Does God really exist? Does he really care? Did he really plan destruction for some people? Or is he a fiction of our imagination?

PHOTOS: ACTRESS APRIL JOJU CRIES OUT AFTER BEING ALLEGEDLY PHYSICALLY ASSAULTED BY HER YOUNGER BROTHER

But ofcourse, not without reactions. Check this out! 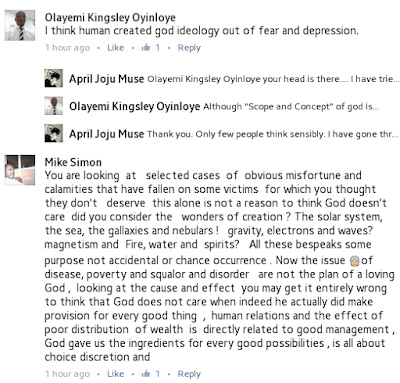