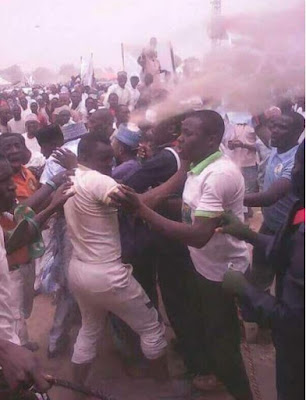 The Senator representing Katsina South at the National assembly -sen Abu Ibrahim escaped lynching today by Funtua residents at an event with the governor of the state and other top shots  in attendance. The people who said they are not happy with the way the lawmaker conducts the affairs of the zone -stoned the senator during the receiving of 11,000 new members into the party by the Katsina state APC Chapter.

Gov. Masari reportedly saved him from being mobbed by angrily electorate in Funtua zone.