So Romantic! The Moment WWE Legend, John Cena Proposed to His Girlfriend at WrestleMania (Photos) 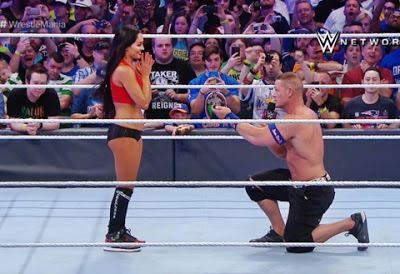 Popular American professional wrestler, rapper, actor, and reality television show host, John Felix Anthony Cena Jr., a.k.a John Cena, got down on one knee to propose to his longtime girlfriend, Nikki Bella in front of 70,000 fans at WrestleMania 33 on Sunday night.

According to Dailymail, the moment took place right after Cena and Bella defeated foes, The Miz and Maryse, who are a married couple in real life, in a tag team match in the ring.

After winning the Sunday match, Cena launched into an emotional speech. 'This is what you wanted over a year ago. 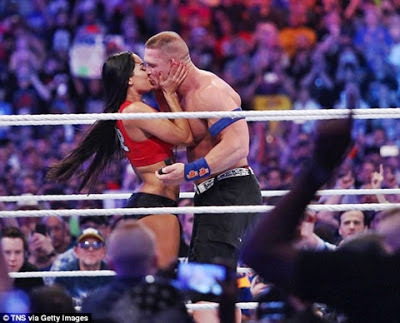 'You broke your neck and did everything you could to come back because you wanted a WrestleMania moment. I'm so very proud of you.

'Right before your surgery, there would be a time when you would be a little loopy and I could ask you anything I wanted. 'If you gave me an honest answer, you wouldn't remember what you said. After a year and half, you asked me all the time. I promised I would tell you when the time is right.

The time is right,' the powerfully built wrestler said. 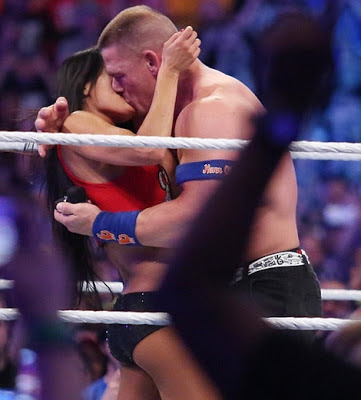 'Do you know one day I'm going to marry you? And you said, "Yes." I just need you to say yes one more time,' the 39-year-old wrestling star then produced an engagement ring box as he stooped down on one knee.

He said: 'I've been waiting so long to ask you this. Stephanie Nicole Garcia-Colace, will you marry me?'.

Bella, who has dated Cena since 2012, answered him with a kiss.