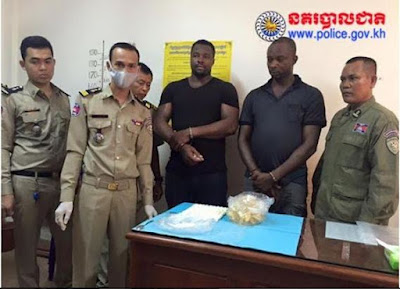 Two Nigerian men arrested for smuggling 1.27 kilograms of cocaine in one of the men's stomachs have had their hearing postponed to seek evidence on whether they knew each other or had accidentally met at the airport. Phnom Penh Municipal Court presiding judge Heng Kesro on Tuesday, April 18th, ordered the postponement until April 28 to clarify what the relationship between the men was.Okafor Ifeanyi Anthony, 42, and Adibe Paschal, also known as Oscar, 33, flew into Cambodia from Nigeria in May last year on a Qatar Airways flight after a transit in Dubai.

They were arrested at Phnom Penh International Airport with over a kilogram of cocaine discovered in Anthony’s stomach, according to their confession at the hearing.

Anthony said that he was asked to swallow the drug capsules by a man in Nigeria named “Nandy”, who allegedly told him to bring the drugs to a man called “Okata” living in Cambodia.

“[Nandy] said Okata will give me food to eat in order to get the drugs out, and he will give me $8,000 as a transportation fee,” he said.Paschal denied any knowledge of the drugs, claiming that he met Anthony for the first time at the Phnom Penh airport and that he came to Cambodia to buy clothes to sell in Nigeria.

“When I was at the immigration section [of the airport], I met Anthony and asked him for help to fill out the form. After passing the scan machine, they arrested us,” Oscar said.
Both suspects said they had not known each other before and that they only started chatting at the airport.