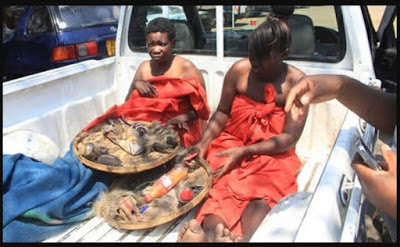 I saw this video online and I think I should share it too. See drama as nude ‘witches’ caught red-handed.

Two suspected witches brought pandemonium in Budiriro. Where they were found at a house in the early hours of the morning; stark n@ked and with suspected witchcraft tools of trade, including traditional herbs, calabashes, live owls and other paraphernalia held in winnowing baskets.

An eyewitness said: “It was around 6am when we heard people shouting ‘witches, witches’ from a house near here.

We rushed there and found the two women sitting outside the house in complete nudity. On being asked where they had come from, one of them said they had come from Mutorashanga, but would not say how they had ended up here or the purpose of their visit.”

Police were called to the scene and took away the two women to Budiriro Police Station before proceeding with them to Southerton Police Station in Harare, Zimbabwe. They had wrapped them in blankets to cover their nakedness. Several hundred Budiriro residents mobbed the “witches” and it took police a hard time to disperse them.

Exodus 22:18 say, You shall not allow a witch to live. These type of Evil people are in many families today...

May heavenly lightning and thunder strike them down, say Amen!