Home News 'We are ready for all out war, we will hit with nuclear attacks of our own'- North Korea tells U.S

'We are ready for all out war, we will hit with nuclear attacks of our own'- North Korea tells U.S 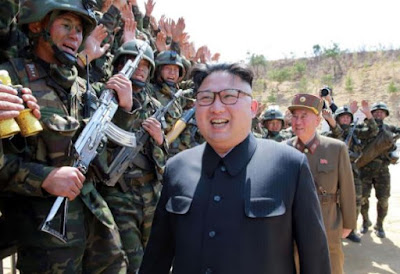 The North Korean government, led by supreme leader Kim Jong-un, after its military parade on Saturday to celebrate the birth of its founder and Kim Jong-Un's grandfather, has warned the U.S and all its neighbors (Japan, South Korea and even China) that the secretive state is ready to attack anyone who provokes them.

The U.S has deployed its navy strike team 'US Carl Vinson' and the 'armada' to the Korean Peninsula and is ready to attack North Korea if they carry out any further nuclear tests , but North Korea seem undeterred and following the massive weapons on display during the parade on Saturday, a war between both or more nations is imminent.

"Today's parade will provide a chance to display our powerful military might," a male voiceover added on the TV broadcast.

'Such reckless acts of aggression" would be countered with "whatever methods the US wants to take." The voiceover concluded.The ceremony held on Saturday in Pyongyang is to celebrate the birth of Kim Il-Sung (Kim Jong-un's grandfather) - a date known as the "Day of the Sun" in the Democratic People's Republic of Korea, the country's official name.