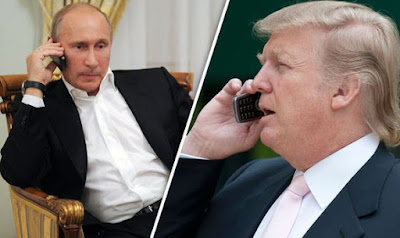 Ahead of a meeting between U.S Secretary of State Rex Tillerson and the Russian government this week in Moscow, top Trump officials have 'ordered' Russia to drop its public and military support of Syrian president Bashar al-Assad or face a deterioration in it's relationship with the U.S.

Russia on Friday reacted to the U.S military strikes on a Syrian airfield after the Syrian government allegedly used chemical attacks on it's civilians killing 89 people- Russia demanded America explain why they attacked a sovereign nation that was actively fighting ISIS terrorists and pledged to beef up Syrian air defenses.

Top Trump officials are now demanding Russia step away from Assad or risk more trouble with the U.S, with investigations underway to ascertain if Russia were involved in the chemical attacks on civilians.

“I hope Russia is thinking carefully about its continued alliance with Bashar al-Assad, because every time one of these horrific attacks occurs, it draws Russia closer into some level of responsibility,” Rex Tillerson, U.S Secretary of State, said on ABC’s “This Week.”

Although U.S officials acknowledged that they have seen no evidence directly linking Russia to the attacks, national security adviser H.R. McMaster said Russia should answer what it knew ahead of the chemical attack since it has arranged warplanes and air defense systems with associated troops in Syria since 2015.

“I think what we should do is ask Russia, how could it be, if you have advisers at that airfield, that you didn’t know that the Syrian air force was preparing and executing a mass murder attack with chemical weapons?” McMaster said on Fox News.

“I think the issue of how Bashar al-Assad’s leadership is sustained, or how he departs, is something that we’ll be working [on] with allies and others in the coalition,” said Tillerson, who after weeks of keeping a low profile was making his debut on the Sunday morning talk shows. “But I think with each of those actions, he really undermines his own legitimacy.”

“At least in the short run, it will further complicate efforts to improve the U.S.-Russia bilateral relationship, which seemed to be Tillerson’s objective in going to Moscow,” said Jeffrey Mankoff, a Russia analyst at the Center for Strategic and International Studies.

“In the longer term, the threat of further U.S. intervention is a card that the U.S. can play to get the Russians to tighten the screws on Assad — on both the chemical weapons and possibly on accepting a political deal with the opposition.”