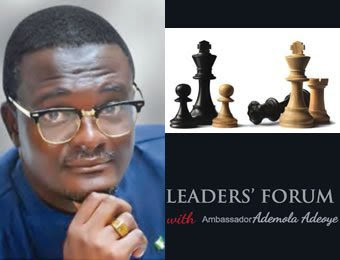 I remember reading through the conspicuous biography of “JFK”, one of the past presidents of the United States of America. One of the decisive areas his team members needed to groom him on—when he was gunning for the highest office in the United States of America was the way he was dressing. They needed to help him to start dressing the part—dressing like a president.

Also, when the “All Progressives Congress” was trying to sell President Muhammadu Buhari to the entire citizens of Nigeria, especially the youth populace, they had to make him appear in some “raiment” that did appeal to the 70 per cent of our national population. They put a well designed three-piece “suit” on his back! He hasn’t put on any suits since he came to power though. But those smart folks succeeded in selling him to the youth populace of our great country and today he is the democratic president of Nigeria!

About a month ago, while affecting positively Lagos State through what I do, a senior staff in a local government shared a thought provoking and life changing story with me and I believe it will change your life for good: “many years ago, there used to be a junior staff in a local government. While others would dress as insignificant people, wearing slippers and tucking out their shirts, the young man would put on a suit and would carry himself as a senior staff, though he was a junior staff. He would take initiative for what he wasn’t sent to do. One day, some superior officers were sent from the state’s “Seat of Power” to evaluate the workforce of that local government.

On that day, the young man did dress corporately as he used to do…When the workforce of the local government was told to assemble themselves, because of an assignment they wanted to give some senior officers in the local government; the young man was given an assignment too, because they thought he was a senior officer!  When a few senior officers saw this, they told those who came from “the Seat of Power” that he was a junior officer. But the man leading the team said and I quote: “I need a man like him. I like the way he dresses and takes initiative.”

They later found out that the man was an “SSCE” holder. The man leading the team gave him some cash to buy a “JAMB” form. From there, he was schooling and at the same time, working. Today, his level at work is higher than that of the Human Resources Manager—who told me the story, though he was his junior at that time! The young man had a very huge vision and it impacted positively on the way he was dressing.

Many years ago, it did not occur to me that the way I was dressing was actually speaking volume about who I was at that time. In those days, I would dress shabbily. One day, a senior colleague called me aside and said: “if you do not know, I will tell you today. The way you dress, says a lot on who you are. When you dress like a goon, people will never believe that you do have anything valuable in you…” Thank God he corrected me.

It is the vision of palace and bastion that makes a man dress as a king long before he gets to the throne. What a man is seeing will determine how he dresses. If he sees himself as a prisoner, he would dress as one. And if she sees herself as a prostitute, she would dress as one. Vision plays a major role in how either a man or woman dresses. To change the way a man dresses, you’d need to help him change what he sees. No one sees himself as a pauper and dresses as a rich man.

What has been shutting your business doors may not be the devil; it may be because of your appearance. About three years ago, I led a team of some interviewers in an organization that was trying to recruit some good hands to join it. My experience on that day opened my eyes to this crucial issue I am addressing today. There was this religious lady—who came to the venue, wearing slippers! When she stepped into the hall where we were, I looked at her and shook my head. Her appearance spoke very loudly and made it impossible for me to hear what she was saying with her mouth. After a few minutes, I told her to step out and that was all.

I am sure she had no vision of joining the organization. If she did, she would have dressed better than she did on that day. Remember, what you are seeing will always impact either negatively or positively on the way you dress. Before you step out of your house on a daily basis, what precisely are you seeing? This will determine the way you’d dress…Remember, you cannot dress as a winner when you are seeing yourself as a loser.

Lastly, it does not cost so much to look so charming. You just need to be wise and creative. God sees the inside, but man does not. Man only sees the outside. The question is, when folks look at you, are you sending the wrong or right signals? Can you beat your chest that the way you dress is not putting people off? Is your appearance attracting quality people or repelling them? Remember, to change the way you dress, you’d need to change what you are seeing.

See you where great leaders are found!