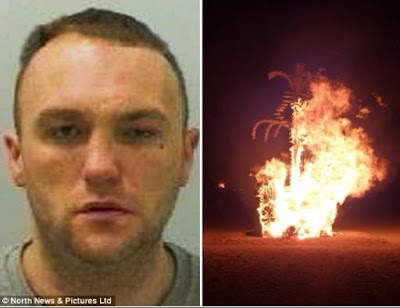 A father, who poured petrol over his girlfriend then set her on fire, has been jailed for eight years.

Lee Ferguson, 32, from Wallsend in North Tyneside, attacked Jade Jordan, who suffered burns to 13 per cent of her body and required surgery and skin grafts.

CCTV footage of the incident, which took place in the early hours of February 19, shows Miss Jordan's torso and thighs ignite into a burst of yellow and orange.

She can been seen lying on the ground in the street, screaming in agony, with her clothes burnt off, in further video from a police officer's bodycam.

The victim spent three weeks in hospital after the attack, suffered 'deep' burns to 13 per cent of her body  and needed surgery and skin grafts.

She will be scarred for life around her stomach, abdomen and legs.

He sobbed in the dock as the footage of his attack and his aftermath was played to the court.

The court heard the couple, who had been together for 12 years and have two children, have stayed together after the attack.

Witnesses from a nearby pub had heard Miss Jordan 'shouting and then screaming' in the early hours and saw the flames.

Ferguson, who stamped out the blaze and covered his victim in a coat to try and stop the flames, was heard saying 'I'm going to jail for a long time for this'.

After hearing at Newcastle Crown Court, Ferguson was jailed for eight years