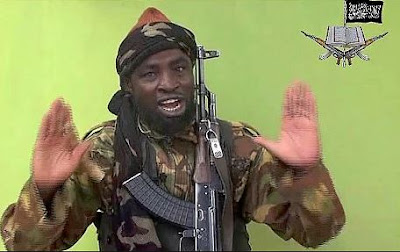 Boko Haram leader, Abubakar Shekau, has been injured and one of his deputies killed in an air strike in Balla village inside Borno state last Friday. According to AFP, two Nigerian Air Force jets had bombarded an area in the village where the sect members had gathered to pray.

"Shekau was wounded in the bombings and is believed to be receiving treatment near the Nigerian border with Cameroon around Kolofata. His deputy, Abba Mustapha, alias Malam Abba, was killed in the attack along with another key lieutenant, Abubakar Gashua, alias Abu Aisha," a military source said.

A member of the state Civilian Joint Taskfoce, Baba Kolo, also confirmed that Shekau was injured in the airstrike. "Shekau was injured and a number of commanders were killed. Among them is his deputy called Malam Abba. They suffered heavy casualties because the bombings targeted a large gathering of his followers attending Friday prayers."

The Nigerian Military is yet to confirm this new development. However a senior military officer in Maiduguri confirmed the air force bombed Boko Haram positions "in the Damboa area on Friday where they hit the targets with precision". "We got intel (intelligence) that the terrorists were gathering at the location and we acted on the report," he added, requesting anonymity as he was not authorised to speak about the operation.

He said he was unable to comment on Shekau but the source with contacts in Boko Haram said Mustapha was preaching when the first jet bombed the mosque at about 1:00 pm. Moments later a second jet targeted worshippers as they fled.

"Shekau was just leaving a house nearby for the mosque when the first jet struck. He was injured in the second strike. They spent the rest of Friday and the whole of Saturday burying the dead" he said.