Chelsea breaks Premier League record for most wins in a season 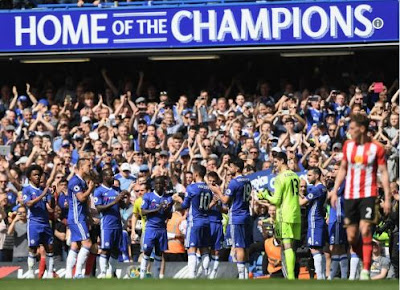 The Blues didn't settle for simply winning the title, instead opting for an historic campaign

With the Premier League title already in hand, Chelsea could have taken it easy in the final week of the season.

Instead, the Blues went for a little bit of history, securing their 30th win of the season thanks to a 5-1 rout of cellar dwellars Sunderland on Sunday.
The victory set a new record for most wins by a club in a single Premier League campaign, which should satisfy manager Antonio Conte's plea earlier this week that his players not relax despite having already secured the title.

With the victory, Chelsea become the third team in top-flight history to win 30 or more games in a season, and the first since Liverpool did so in the pre-Premier League era in May 1979.