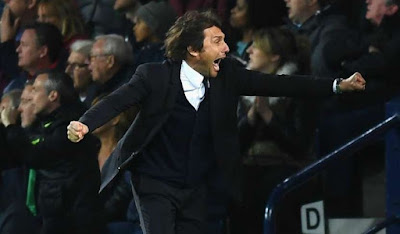 Diego Costa led the Blues's title celebrations as he proceeded to drench his manager in champagne upon his return to the dressing room.

Footballers are a funny breed at times. Having just won the Premier League title, how did the Chelsea players congratulate manager Antonio Conte? By giving him the soaking of a lifetime!

After Michy Batshuayi netted a late winner against West Brom to seal the title, the Blues squad were understandably jubilant.

And Conte felt the full force of their joy as he was soaked by first an ice bucket and then champagne poured on him by a half-naked Diego Costa.

Hopefully for the Italian boss he's got a spare suit as the champions are next in action on Monday evening when they take on Watford.

For now though, we're sure he won't mind a drenching in the name of his squad's achievements!