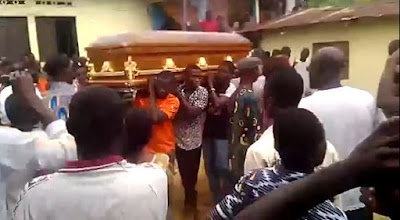 A Zambian man named Hagra Tembo on Facebook shared this shocking video of a corpse that refused to buried until it took villagers to the resident of its killer. According to his caption, he wrote:

'A body refused to be buried until it took villagers to a house where the person behind the death of the deceased resides'In the video, the villagers were all shocked when the undertakers were seemingly being controlled by the corpse who turned them round until it led them to its killer's house. The incident is believed to have happened in a Zambian village. Watch the shocking video after the cut..