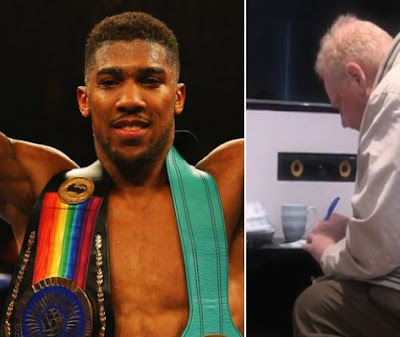 Twelve days after world heavyweight champion, Anthony Joshua, claimed both the WBA and IBO belts in a thrilling encounter at Wembley, the 27-year-old received an early morning wake-up call from drug testers.

In a video he posted, Joshua showed his encounter, captioning it: “Drug testers knocking early
doors.”

Joshua is asked two questions to which he replied “No.”

Drug tester: Has the athlete performed altitude simulation in the last two weeks?

DT: Has the athlete donated blood in the last three months?

Heavyweight boxing has been rocked by a number of recent failed drugs tests, with both Alexander Povetkin and Andrzej Wawrzyk testing positive in the lead up to fights with WBC champion Deontay Wilder in the last couple of years, UK Daily Mail reports.