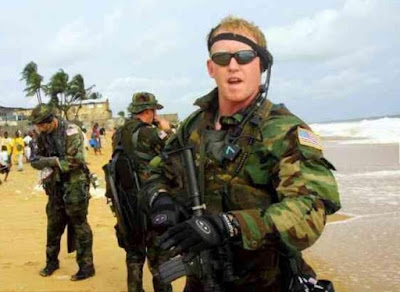 The former US Navy SEAL who killed Osama bin Laden has described the moment he claims he shot the al-Qaeda leader dead.

Robert O’Neill, who claims to have fired the fatal bullets, has for the first time published a detailed account of the mission that lead to the 9/11 mastermind being gunned down in a secure compound in Abbottabad, Pakistan, in May 2011.

In a dramatic extract from his new book, The Operator, published in the Mirror, the former Seal described the moment he fired two shots at Bin Laden and “split open” his head.

“I turned to the right and looked into an adjoining room,” he said. “Osama bin Laden stood near the entrance at the foot of the bed, taller and thinner than I’d expected, his beard shorter and hair whiter.

“He had a woman in front of him, his hands on her shoulders. In less than a second, I aimed above the woman’s right shoulder and pulled the trigger twice. Bin Laden’s head split open and he dropped. I put another bullet in his head. Insurance.”

Mr O’Neill also recounted the tense moments as the elite Seal team landed outside the compound under the cover of darkness. One of the helicopters carrying the unit was forced to make a crash landing, and the team initially failed to break into the compound.

“Within seconds of jumping from the chopper, the breacher attached a seven-foot charge of C-6 to the gate in front of us and blew it,” he said. “The metal gate peeled open like a tin can. Behind it was a solid brick wall. The breacher said: ‘Failed breach. This is bad.’ ‘No, this is good,’ I said. ‘That’s a fake door. That means he’s in there.’

“As we entered, it was all dawning on me: ‘Holy s***, we’re here, that’s Bin Laden’s house. This is so cool. We’re probably not going to live, but this is historic and I’m going to savour this.”

The Seal team advanced through the three-floor compound, tying up any women and children they encountered. It later emerged that Bin Laden’s four wives and 17 of his children were living there.

At one stage, while making their way through the house, the team encountered Bin Laden's youngest son, 23-year-old Khalid, on a landing, before he ran behind a banister.

He did not know that the intruders were American, so, O’Neill said, the Seal team leader whispered to him in Arabic, saying: “Khalid, come here.”

As he poked his head round the corner and said “What?”, he was shot in the head – a moment Mr O’Neill recounted in graphic detail.

“That was his final word”, he said. “The point man shot him in the face. The bullet entered above the chin and exited out the back of his head. Khalid dropped.”

Mr O’Neill also described the anxieties of the soldiers carrying out the raid. At one point, a Seal shot a woman who he said had jumped in front of a man he was firing at. “Am I going to be in trouble?”, the soldier asked his friend.

Mr O’Neill said that, after firing the shots that killed Bin Laden, his mind went blank until one of his colleagues, arriving in the room, turned to him and said: “You just killed Osama bin Laden.”