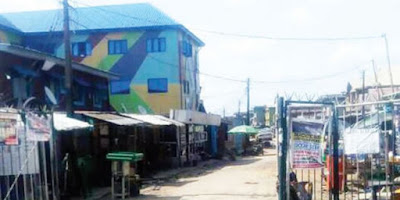 A hairdresser, Yetunde Oladipupo, aka Iyabo, has committed suicide on Onabola Street, Owotutu, in the Somolu area of Lagos State., Punch reports.

It was learnt that Oladipupo took an insecticide, Sniper, on Friday shortly after seeing off some friends who had visited her.

Although the cause of the visit could not be ascertained by our correspondent, it was gathered that the mother of four went to a shop afterwards and bought the insecticide.

She was alleged to have taken it and was later rushed to the General Hospital, Gbagada, where she died.

It was also learnt that the Ijebu-Igbo, Ogun State indigene, had taken a loan of about N150,000 from a microfinance bank and the creditor had been pestering her to pay.

A resident, who did not want to be identified, said the victim was always depressed because she had no means of repaying the debt.

“Iyabo (Oladipupo) has four children and her husband is based in Abuja. He comes home once in a while. She was a hairdresser and had a small shop where she sold some things.
“She borrowed N150,000 from a microfinance bank. When the pressure became too much for her and she could not pay, she became desperate, drank the insecticide and died.”

Another resident said two friends had visited her a few minutes before the incident, adding that it was after the visit that she decided to take her life.

“Around 7pm, two friends visited her and she saw them off. As she was returning, she went to a shop opposite her house where they sell provisions.

“As she was ascending the stairs to the first floor where she lived, she drank the insecticide. Within seconds, she started feeling uncomfortable and called her five-year-old child to go and get help. She was rolling on the floor and groaning with pain.

“Everybody was alarmed upon seeing the empty container of the insecticide. She was taken to a private hospital on the street, but she was rejected. She was then rushed to the General Hospital, Gbagada, where about five doctors struggled to save her life. She, however, died.”
A top official of the general hospital confirmed that the victim was brought to the hospital around 7pm, adding that she died in the early hours of Saturday.

“The woman was brought to the hospital around 7pm on Friday and her people said she collected a loan which she could not repay. We don’t know the details. Doctors tried to save her life, but she could not make it.”