I am a Biafran - former Presidential candidate, Emmanuel Iwuanyanwu says 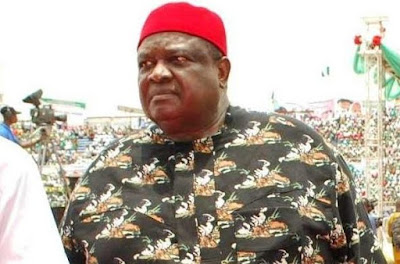 Former Presidential candidate, Emmanuel Iwuanyanwu, says he is a Biafran just as the Hausas are known as Arewas and Yorubas are known as Oduduwas. Iwuanyanwu said this over the weekend while reacting to the release of IPOB leader, Nnamdi Kanu last week.

According to Iwuanyanwu, there was no reason for the Federal Government to have detained Kanu in the first place.


“I have always said that was no reason detaining Nnamdi Kanu. In the law of this country which I know unless you have arms. Nnamdi Kanu didn’t commit any treason. Treason is when you take up arms against the government, he didn’t take up any arms, there was no reason whatsoever for detaining him, because everybody have the right to say I want Biafra, everybody have the right to say I want Biafra. For God’s sake, I’ve made it clear to people that Biafra is for the Igbo. Hausas are Arewas, Yorubas are Oduduwas and we are Biafrans. There is a problem we have because Biafra fought a war and people are ashamed to say they are Biafrans but I am not afraid to say I am a Biafran. Biafra is part of Nigeria, Arewa is part of Nigeria, Oduduwa is part of Nigeria; all of us are there. If a person from Oduduwa takes up arms to secede from Nigeria, its treason but if one is just saying by words of mouth, it just an ordinary expression of public opinion. There is no law that makes such a person get convicted by just saying we want to secede, it’s a right of expression. But if somebody from Oduduwa is amassing arms to topple the government to secede, its treason.

If somebody from Arewa is amassing arms to topple the government, its treason, if somebody from Biafra, because all of us are from Biafra I am from Biafra, to topple government, its treason. But if I come and say I want Biafra, it’s no offence. To the best of my knowledge Kanu didn’t have any violent means. All he said was that he wanted Biafra. He shouldn’t have been detained in the first place, I said it long ago. I said the government is making him a hero but people misquoted me and said I said government should jail him. No, I said that getting an innocent person, putting him in prison, they are making him a hero. So what Nnamdi Kanu is now is a hero because of all these. So he has not committed any offence and shouldn’t have been in detention in the first place. But there are also some parts of Igbo, who since after the war, they don’t want to talk about Biafra. You cannot wish away Biafra, Biafra is there just like you can’t wish away Oduduwa or Arewa.”he said