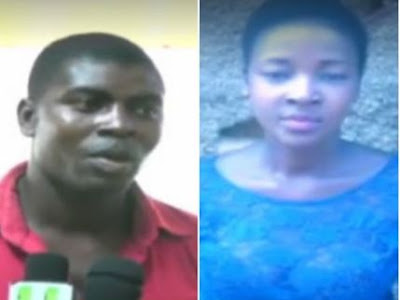 A 29-year-old man, Rex Kpanor, a cleaner at the Cardio Thoracic Centre, Korle-Bu Teaching Hospital, has been arrested for allegedly killing his girlfriend at Labadi, a suburb of Accra, Ghana.

The victim, Christiana Ohenewaa Anim, a mother of three was purportedly killed following a misunderstanding between her and the suspect.

“I am satisfied that she is dead and I don't regret killing her. Now the police can do whatever they want to do with me….” . These were the purported words of Rex.

Narrating the incident, Chief Superintendent Oduro Anning, La District Police Commander, said on May 11, 2017, at about 12pm, a woman rushed to the police station to report that a man had butchered his wife in a house close to her restaurant.

The family of the deceased was asked to help apprehend the suspect who had gone into hiding after allegedly committing the act. According to Chief Superintendent Oduro Anning, on Sunday, May 14, a family member received a phone call from the suspect and in the course of their conversation, he asked how the wife was faring.

The family member lied to him that his wife was on admission at the Police Hospital and so the man proceeded to the hospital (with the intention to finally kill her) when he was apprehended.

At the police station, Rex, who reportedly claimed he was not remorseful about what he had done, told the police that he was satisfied that the wife was dead. Rex had co-habited with the woman for about 11 years and that their first born is 10 years old.

The couple was living at Sukura near Mamprobi when a misunderstanding ensued between them. Madam Christiana then relocated to live with a family at Nima but her husband managed to trace her to her new place.

This compelled the woman to further move to live with an aunt at La, but the man kept pestering her with calls. On Thursday, May 11, Rex traced Christiana to La and in the course of their conversation, a fight ensued between them, which eventually led to the murder.